Under the direction of David M. Harris, The Raleigh Ringers has released seven CDs, and two DVDs of holiday concerts titled One Winter Evening at Meymandi and A December Tradition. Two one-hour concert specials were created from the first DVD and broadcast on over 250 American Public Television stations in 45 states. A new, one-hour holiday special based on the second DVD aired over 400 times in 38 states in its first year of national distribution. The group has performed in 39 states, the District of Columbia, Canada, England and France during its tours, and plays two dates each year at a major venue in Raleigh. The Raleigh Ringers also sponsors an annual festival for adult ringers, an annual festival for youth and less experienced ringers, biannual sight-reading sessions for those interested in new handbell music, a biennial performance experience for advanced ringers, and handbell techniques classes several times a year.

The Raleigh Ringers promotes the art of handbell ringing by: 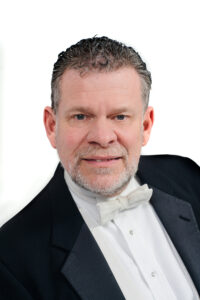 David M. Harris has been the director of The Raleigh Ringers since January 1990, when he was instrumental in the formation of the group. David is a graduate of The Pennsylvania State University and has studied conducting privately with Dr. William A. Payn at Bucknell University. David was the director of the handbell program at Hudson Memorial Presbyterian Church, and has served Handbell Musicians of America in several capacities: as All-Star Conductor, Ringing Track Conductor, Instructor for the National Seminar, North Carolina State Chairman, and as Area III Treasurer. He chaired the national committee that planned the first Community/Professional Handbell Choir event, Pinnacle 2000, held in Las Vegas, Nevada. In addition, David has led well over 200 handbell festivals and workshops in 36 states as well as in England, Puerto Rico, Canada, and the Caribbean. He has also been the primary handbell clinician for several denominational music events, including Montreat, Lake Junaluska, and Lutheridge (NC); Mo-Ranch (TX); Massanetta (VA); and the National Association of Pastoral Musicians (KY). He has written several articles for Overtones, the national publication of Handbell Musicians of America. After growing up in the Northeast, David moved to Raleigh with his wife, Kristina. Dave and Kris have three grown children and one granddaughter.

Fred Gramann, who retired in 2022 after 46 years as Director of Music at The American Church in Paris, France, serves as the Honorary Associate Director of The Raleigh Ringers. Fred is a well-known and highly regarded composer and arranger of handbell music as well as a sought-after clinician.

Dr. William Payn, Artistic Consultant of The Raleigh Ringers, recently retired as former Chair of the Department of Music, Professor of Music, and Director of Choral Studies at Bucknell University in Lewisburg, Pennsylvania where he led his choirs to international recognition. In addition to his many professional accomplishments, awards and recognitions, Payn continues to be the guest festival conductor, headliner and clinician at hundreds of events in the U.S. and abroad.

Hart Morris, composer and retired minister of music from Tulsa, Oklahoma, has arranged all of the Trans-Siberian Orchestra pieces that The Raleigh Ringers perform, along with many other favorites such as Dueling Banjos, Bugler's Holiday and You're a Mean One, Mr. Grinch.

Keith Burt studied piano at the University of Central Florida and was involved with handbell choirs along the way, either playing or directing. For over 15 years, Keith has been transcribing and arranging music for The Raleigh Ringers and groups across the country. While Keith is best known for the rock 'n roll pieces including More than a Feeling, Kashmir, Back in Black, and Dust in the Wind, he has also arranged several other well-loved works for the group such as Prelude in G Minor, op. 23, no. 5 which is included on the group's newest CD, Progressions.

The Raleigh Ringers is proud to be affiliated with several outstanding organizations:

In addition, The Raleigh Ringers is pleased to be considered a designated beneficiary of the United Way of the Greater Triangle and State Employees Combined Campaign.

"The music was beautiful, the entertainment hilarious, and the whole experience was wonderfully worthwhile. We loved it so much we tried to get a flight changed to come hear your concert again!"

“What skill and diversity of music! I could have listened another three hours! Thank you for the inspiration and entertainment!”

“I never would have thought I'd want to go to a handbell concert, but when I heard handbell rock ’n’ roll on the radio, I told my friends, ‘We're going!’ And it was just great.”

"The Raleigh Ringers are the best handbell ensemble on the globe!!!!”

"Thank you all for being ambassadors of superb musicianship, amazing technique, and sharing the joy of doing something you love, which is contagious.”

“The Raleigh Ringers are truly a wonderful instrument. It is a joy to watch how precisely they respond to director David Harris' musical goals, and how audiences respond as well. This group has definitely attained 'handbell superstar' status.”

“The best part was, in spite of all the amazing things that they can do with bells – the bass ringer assignments, flawless technique, and all of those kind of things – the best part was that it was musical. I simply enjoyed the music.”

“...I did not know how good 'good' is in bell ringing until I heard you. It was simply superb, and you must have known that from the unusually enthusiastic response from the audience.”