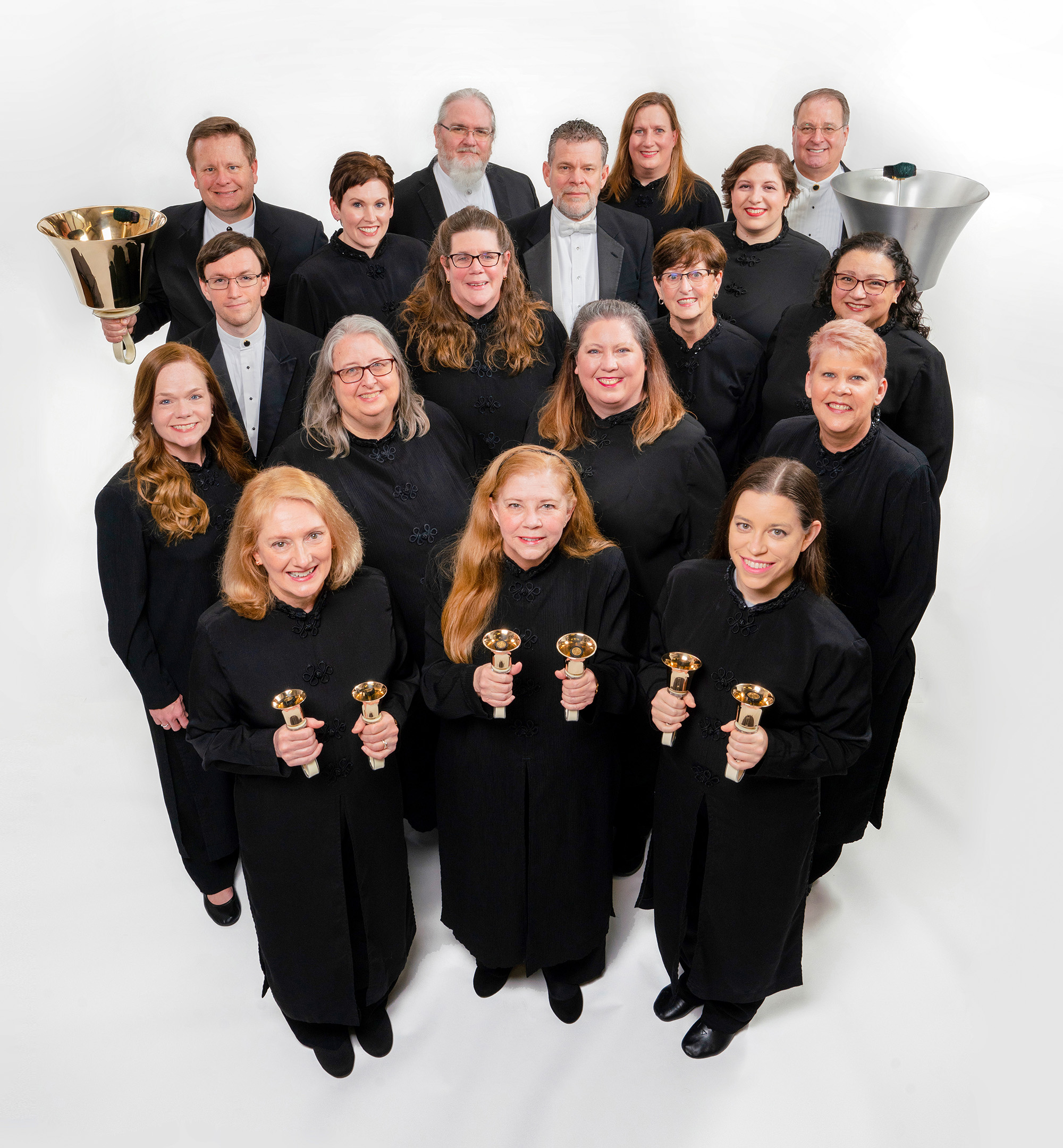 Kathy Baker started playing handbells at the age of 14, having been recruited into her church choir because she could read music, and hasn’t stopped playing since. Now joining The Raleigh Ringers for a sixth year, Kathy also plays bells for a church near her home in Burlington and works in Institutional Research at UNCG, all of which leaves little time for much else. Any remaining time is spent with her husband, Tim, and daughter, Amanda, who are supportive of her ringing, though the cat, Amadeus, remains skeptical.

Ruth Brown holds a Bachelor of Music from the University of Texas at Dallas, with graduate studies in Flute Performance and Pedagogy at Meredith College. She began playing handbells in 1995 after seeing The Raleigh Ringers perform. Ruth teaches private music lessons and directs church handbell choirs when she is not crunching numbers as a bank analyst. She and her husband, David, have been blessed with two amazing daughters, their wonderful husbands, and seven beautiful grandchildren.

Keith Burt was born in New Jersey but lived most of his life in Florida. He was drafted into handbells when a former piano teacher said, “Just try it for one rehearsal!” and has been playing ever since. Keith studied piano at the University of Central Florida and enjoys transcribing and arranging music for handbells. He currently works at Martin Architectural Products and fills his spare time with his great loves, movies and heavy metal.

Angie Chiatello comes to us from California via Purdue University, where she played their famous Shaker Chimes as a member of the university's Handbell Choir. Angie works in marketing for an engineering firm, does freelance graphic and web design work, and in her spare time, bakes and decorates sugar cookies. She also loves to read and travel, having visited all but six of the United States.

Ellen Daniels, president of The Raleigh Ringers, began her love of music early. When she was two years old, she was caught imitating her older sister and picking out Für Elise on the piano. Her precociousness led to piano lessons and later, Ellen sang in school choruses and church choirs. Then her church got a set of handbells and started a youth choir. She was hooked. In her fourth year with the group, Ellen is living out her dream. She recently retired so she can spend all her time volunteering and playing handbells. Ellen enjoys traveling, ballroom dancing, and spending time with her family.

Matthew Eden, a Charlotte native, was first seriously introduced to music through his school orchestra, where he learned to play viola. Soon after, he joined the Charlotte Symphony Youth Orchestra and was introduced to handbells through Morning Star Lutheran Church under Ed Tompkins. He progressed quickly in both, eventually becoming principal violist of the Youth Orchestra and becoming a member of Charlotte Bronze Handbell Ensemble, with whom he performed for nearly a decade. More recently he has also enjoyed playing with the Queen City Ringers.

Justin Farmer was born and raised in Charlotte, and upon moving to Raleigh for graduate school, jumped on the opportunity to be a part of The Raleigh Ringers. His music background consists of piano, percussion, choir, and a brief stint as a music teacher in Japan. He is currently studying to earn a Ph.D. in Economics, and will talk your ear off if you dare mention math. Outside of studying and music his interests are... well, what else do you need in life?

Erin Glendening comes to us from Pella, Iowa, via Pittsburgh, Pennsylvania. Erin followed in her siblings’ footsteps and began ringing at the age of 12. The pursuit of a master’s degree took Erin to Pittsburgh, where she directed an intergenerational handbell choir and a children’s chime choir at Shadyside Presbyterian Church, while also ringing at Mt. Lebanon UMC. Erin rings with the Bells of Saint Andrews and directs the children’s chime choirs at Saint Andrews Presbyterian Church. When not ringing, Erin works as a computer geek and enjoys solo ringing, cross-stitching, knitting, crocheting, reading, and watching movies.

Wayne Hicks is excited to be in his third year with The Raleigh Ringers.  He began ringing handbells in 2001 when he submitted to the Lord's calling and returned to church. His music background includes trumpet, mellophone, and French horn. Wayne is a rocket scientist at NASA. He has his pilot license and enjoys flying with his wife Mary and grandson Alexander in his spare (???) time. Wayne is from Carrollton, Virginia.

Sandra Hopson was born in Illinois and grew up in the Washington, D.C., area. She began ringing at the age of ten and performed with the Carol and Wesleyan Ringers of St. Matthews UMC, Annandale, Virginia, directed by Nancy Cappel. Sandy and her husband James are the parents of two daughters, Emily and Megan. Sandy is a charter member of The Raleigh Ringers.

Lauren Housley began ringing at age 12 at First Presbyterian Church of Ambler, Pennsylvania, and carried her love of ringing into her university career, joining the Rooke Chapel Ringers of Bucknell University. Since graduation, she has performed with other community handbell groups, and has been ringing with The Raleigh Ringers since 2018. When not ringing, Lauren can be found up to her knees in any area creek, studying aquatic insects for the state of North Carolina; or knitting, crocheting, or spinning.

Allison Keisler is originally from Hickory, North Carolina, and teaches chorus and handbells at Bandys High School in Catawba County. Her love of handbells started at the age of 9 in her church bell choir, which she later directed for 15 years. She has been a member and assistant conductor of several professional handbell groups in the Hickory and Charlotte areas. Allison has four beautiful children ranging in age from 12-17 who have many different interests including sports, music, reading, and video games. She and her wife, Kristin (fellow ringer) currently live in the Winston area and enjoy shopping local, going on weekend adventures, and checking out craft breweries across North Carolina.

Blake Long comes to us originally from Farmville, North Carolina, where his early years were a mix of piano, voice lessons, and euphonium performances. He took his music to UNC-Chapel Hill where he performed in various groups while earning a Chemistry degree. After a stint in pharmaceutical R&D, he now is a consultant advising pharma companies. Blake joined the group a year after learning how to play handbells and played for six years. He returns to the group after a 10+ year break, during which he and Melissa, his wife of 22 years, have raised three boys, Spencer, Tyler, and Barrett in the town of Clayton.

Cindy Massey, one of Cary’s earliest “Yankee transplants,” managed to turn her toddler virtuosity at the Fisher-Price Xylophone and subsequent love of music into the ringing adventure of a lifetime in 1990 – as a charter member of The Raleigh Ringers! In the past, when she wasn’t working at a quilt shop, ringing, sewing, or shopping, Cindy claimed to enjoy helping husband Phil care for the pecan trees and beehives on their Nuts for Nuts farm. Forget that. Now she’s providing daily loving care for her two beautiful grandchildren: Hudson and Amelia. Well, that, and processing pecans. Lots of pecans.

Katie Melton is excited to join The Raleigh Ringers! As the daughter of a bell director who also sings soprano, Katie has been singing and ringing from an early age. When she started attending area and national bell events with her mom, she knew her fate was sealed. From Charlotte to Paris to Los Angeles, Katie has rung and sung with a variety of wonderful church and community choirs. Now home in Mooresville, she's returned to performing with Queen City Ringers and sings at South Park Church in Charlotte. In her free time, Katie enjoys taking pictures of her four cats, playing video games with friends, and watching period dramas with her mom.

Kristin Murphy, a native of Virginia Beach, relocated to North Carolina to continue ringing with The Raleigh Ringers. Kristin started ringing as a child with Virginia Beach UMC and continued ringing through college and pharmacy school with Williamsburg United Methodist Church, Virginia Handbell Consort, James River Ringers, and Virginia Bronze. When she is not ringing, Kristin leads the medication safety team for Novant Health. She and her wife (and fellow ringer) Allison can often be found at Starbucks, a local craft brewery, or chatting it up with daughters Elizabeth (age 9) and Meredith (age 6) over Skype to hear all about their adventures in Dublin, Ireland.

Cathy Rowe comes to Raleigh from Springfield, Illinois, where she played with the community group Bells in Motion for 13 years. Piano lessons at the age of six started her love of music, and a church donation of three octaves of bells by her parents started her love of handbells in high school. Cathy lives with her 2 furballs Hawkins and Hayley and she is currently working as a Programmer/Analyst for Measurement, Inc. in Durham.

Sarah Sheffield is excited to be in her sixth year with the group! Sarah's love of handbells began in 1994 when she was recruited to play in her church's choir. Now she is around bells every chance she can – like ringing with Queen City Ringers, Distinctly Bronze East, subbing in other choirs, solo ringing, and directing. Sarah is involved with HMA Area 3 and is the Coordinator of Events. Outside of ringing (there's a life outside of bells?), Sarah likes to read, cross stitch, go to the movies, and play in her church's flute choir. Sarah has a music education degree (French horn), though works for an insurance agency. She and her husband Milton (who also rings) live in Charlotte.

"The music was beautiful, the entertainment hilarious, and the whole experience was wonderfully worthwhile. We loved it so much we tried to get a flight changed to come hear your concert again!"

“What skill and diversity of music! I could have listened another three hours! Thank you for the inspiration and entertainment!”

“I never would have thought I'd want to go to a handbell concert, but when I heard handbell rock ’n’ roll on the radio, I told my friends, ‘We're going!’ And it was just great.”

"The Raleigh Ringers are the best handbell ensemble on the globe!!!!”

"Thank you all for being ambassadors of superb musicianship, amazing technique, and sharing the joy of doing something you love, which is contagious.”

“The Raleigh Ringers are truly a wonderful instrument. It is a joy to watch how precisely they respond to director David Harris' musical goals, and how audiences respond as well. This group has definitely attained 'handbell superstar' status.”

“The best part was, in spite of all the amazing things that they can do with bells – the bass ringer assignments, flawless technique, and all of those kind of things – the best part was that it was musical. I simply enjoyed the music.”

“...I did not know how good 'good' is in bell ringing until I heard you. It was simply superb, and you must have known that from the unusually enthusiastic response from the audience.”